In our previous post, we benchmarked gaussian16 on Threadripper 1950x. We mentioned that threadripper is quite good for calcultation, but its parallel efficiency is rather bad…

We have been testing our setup and finally could improved the parallel efficiency!!

In our previous post, parallel efficiency was around 2 (4 –> 16core). So this is a big progress!!

We will explain the detail.

As with the previous time, I did the optimization the freq calculations for the natural product “vomilenine”.

The detailed calculation result is as follows.

Some of you might wonder why we compare Threadripper 1950x with the previous generation’s Xeon. This is because we own Xeon E5-2667 v2 (8 CPU 64 core).

I also made a bargrapgh of parallel efficiency as follows. 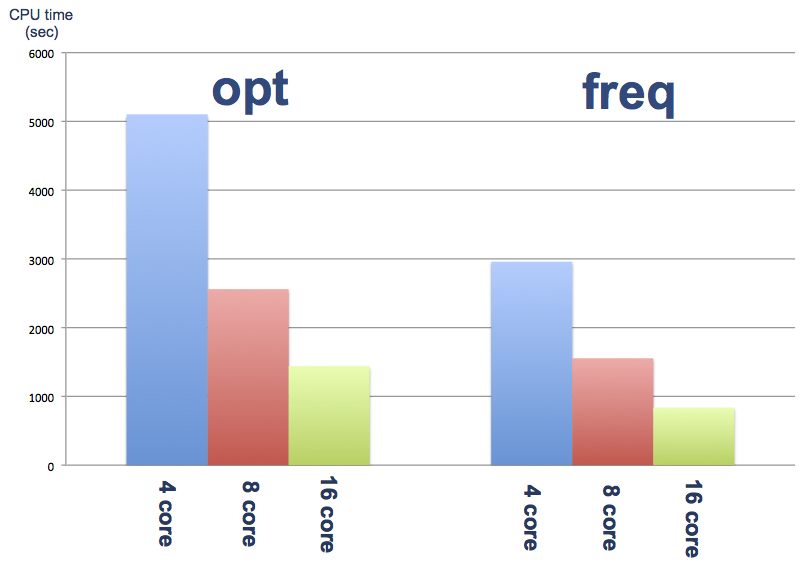 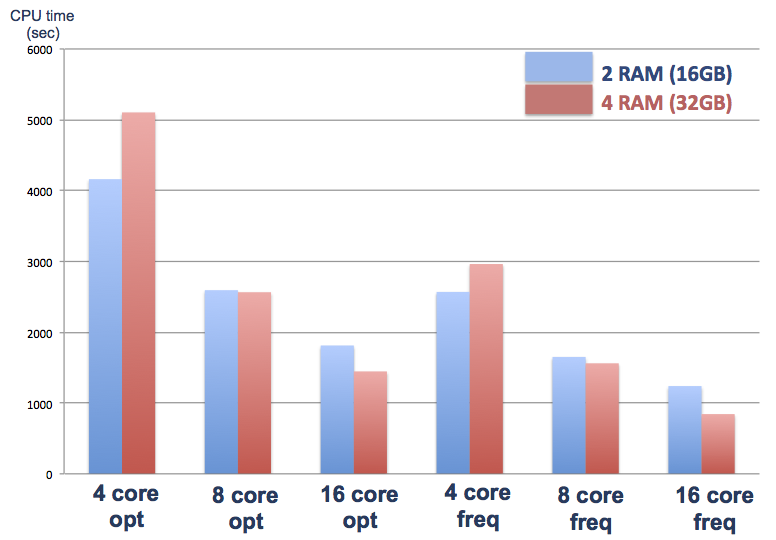 In conclusion, the calculation speed is faster in NUMA mode.

It is about 5% faster for freq, about 2% faster for opt. NUMA is faster than UMA! We think this is quite big difference when calculating large systems. MSI also had a memory mode called Socket, so we tried it, but exactly the same result as UMA mode (Distributed, DIE) was obtained.

For the specification of the number of cores, you should use %CPU instead of %nprocshared. When using %CPU, the calculation speed is about 2% faster than %nprocshared.

Since calculation speed decreases when too much memory is allocated for calculation, we changed the amount of memory to 16 GB, 8 GB, 4 GB by calculation using 16 core with 2RAMs, but there was almost no change and no improvement in parallelization efficiency.

Although parallel efficiency was improved by installing 4RAMs, since the calculation speed fell even at 4 cores, it is not clear if computation efficiency has increased as a total. Usually we often throw four 4-core jobs on Threadripper, so . . .

Technically EPYC has the same system with Threadripper, it might be good to do calcultion using many cores on EPYC.

As the parallel efficiency was dramatically improved, we strongly recommend you to use Threadripper for your calculations!

In our next post, we plan to benchmark test397 and test310, and also test the dependency for the level of thepry (HF and MP2) and the size of the basis set.

We compared the computation efficiency for 1 job on 1 system and full load.

When the IRC calculation doesn’t work…

Trial and error is necessary when IRC calculation does not go well, but their efforts are not always rewarded. But I summarized what I think is better to try at least. If there are better solution besides the method described in this post, please write it in the comment field by all means. Then we can share information!

Gaussian 16 was released early in 2017. A binary compatible with the AVX 2 extended instruction set has been newly available. Also, with the corporation of Gaussian, Nvidia and PGI, GPGPU is now available for DFT calculation and HF calculation.
When the IRC calculation doesn’t work…
Finally Intel release 12 cores 7920x!!