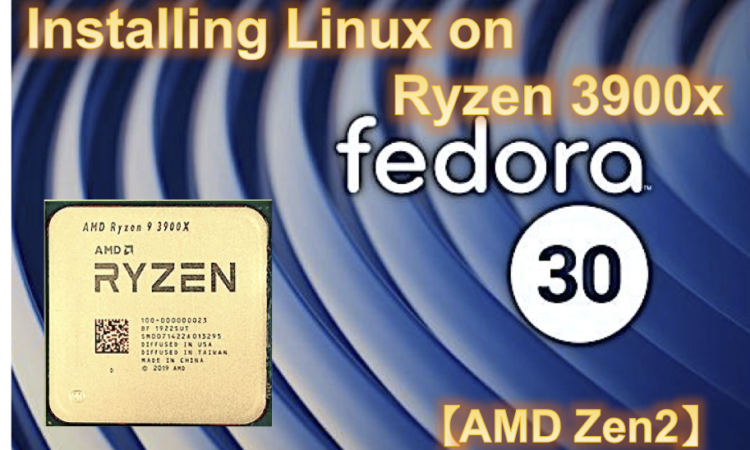 Although we ordered Ryzen 3900x on Amazon on July 7, we could finally got it on August 11th. You can see how popular it is because it is still out of stock in most of PC stores.

Anyway, we finally obtained Ryzen 3900x! Then, we built Ryzen 3900x machine, and tried installing linux. However, we encountered an unexpected error.

In this article, we would like to write about how we installed linux on Ryzen 3900x.

Does ZEN2 not support all Linux Distro?

After assembling the Ryzen 3900x machine, I tried installing the following distros, but all failed.

We tried both desktop and server edition, however, both didn’t work.

For CentOS and Fedora, the installation process was not be completed successfully. Installation of Ubuntu finished normally, but the grub screen was displayed and it could not be started.

We heard that installing linux using a different machine works, so we installed Ubuntu 16.04 using Intel core-i9 7960x. This one worked with ryzen3900x, but stopped using it because there were various inconveniences.

So we tried Debeian10, but it didn’t work in my environment. . .

The cause of the error is RDRAND. It seemed that the only way to resolve the error is to wait for BIOS update.

The motherboard we purchased is MSI’s X570-A PRO. We choose this because it was the cheapest one.

AMD released a new BIOS in early August, but as of August 12, when we got the Ryzen3900x, there was no BIOS update provided from each motherboard manufacturer yet.

Updating the BIOS on an MSI motherboard is easy.

First, go to the product homepage on different computer and click on support. This will take you to the BIOS download page.

We tried installing Linux again after updating the BIOS.

First, I tried Ubuntu 16.04 desktop edition and Fedora 30 desktop edition. In both cases, the installation itself was successfully completed, but the grub screen was displayed when booting.

Next, we tried the Fedora 30 server edition, and finally it worked!!! We are not sure, but there might be some problem with GUI setting…

Anyway, We could finally install Linux on Ryzen 3900x!

We installed and run Gaussian16 revB01 with Ryzen 3900x. However, we encountered the following error
Error: illegal instruction, illegal opcode

We had no idea about it. But, when we upgrade Gaussian16 to revC01, it worked!!!

After all, taking a new CPU is a big risk in terms of compatibility. This time, too, we wasted about 2 days.

BIOS update and Fedora 30 server edition were the key for linux installation!

In the next article, we will release the gaussian16 benchmark on Ryzen3900x! looking forward to!