In our last post, we showed how to build a PC with Ryzen Threadripper.

Here we gonna show the gaussian16’s benchmark. In this post, we used only one molecule for benchmarking, but will make more accurate and diverse benchmark in the near future.

Based on our calculation, Threadripper is good for gaussian calculation.
First of all, the cost performance is amazingly great. It costs less than $1000 and has 16 cores! And Threadripper is also compatible for ECC and overclocking. There is no reason to pay a lot of money for Intel Xeon CPUs.

We used the following PC parts.

We have installed Linux Fedora26 as OS, and installed Gaussian16 AVX2.
Memory is overclocked to 3,200MHz, and SMT (Intel calls this Hyper Threadding) is disabled.

We choose a natural product,vomilenine for our benchmarking test.
I draw the 3D structure on Gauss View and carried out Optimization and Frequency calculation. This compound has 47 atoms and made of C,H,N, and O, which is average size molecule for the QM calculation.

We used the following input file.

Memory allocated 1 GB for 1 core. That is 4 GB for 4 core, 16 GB for 16 core (Actually, this amount of memory allocation is not necessary…).

As we don’t install gaussian16 on Intel Xeon E5-2667 v2, we run gaussian09 with the keywords “int=grid=ultrafine” and “scf=tight”.

The result of benchmarking is as follows. 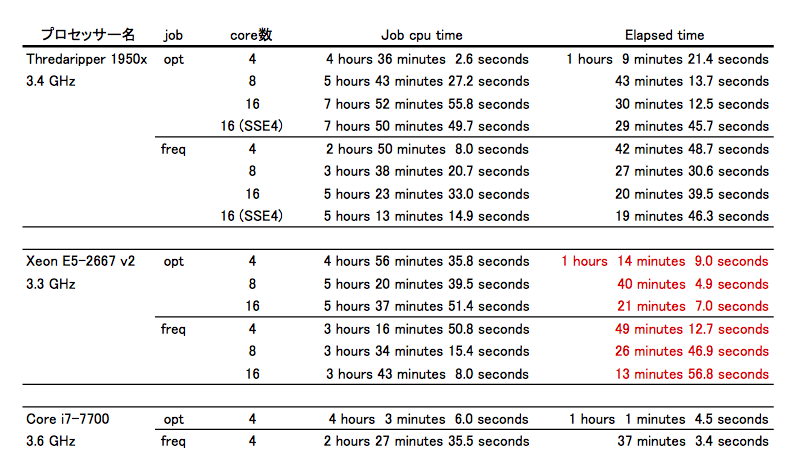 As Xeon E5-2667 v2 uses g09, which doesn’t show elapsed time at the end of log file, therefore we divided cpu time by the number of nprocshared.

Next, we made a graph with unit of time in seconds. First of all, let’s compare the performance difference among three kinds of CPUs. 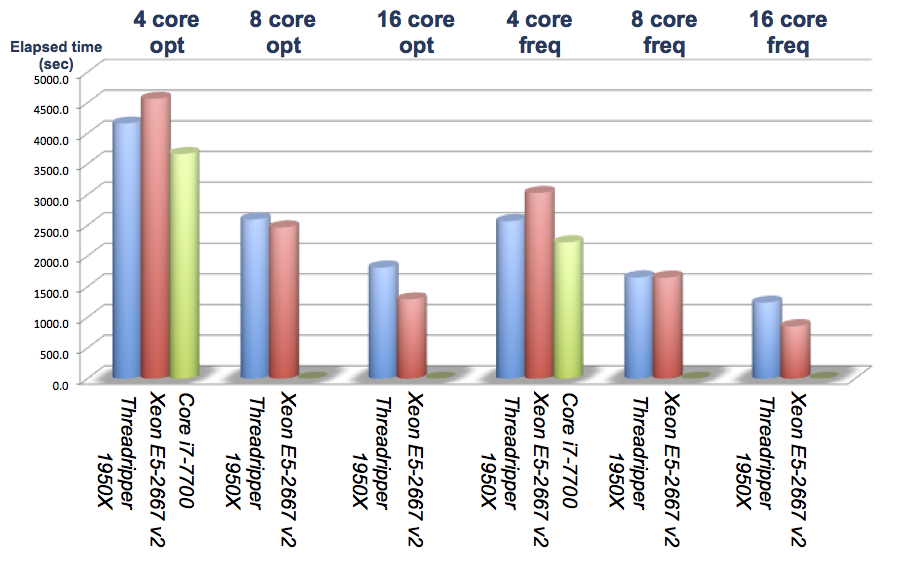 For the 4 core job, the best performanced CPU was core i7-7700, and the second best CPU was Threadripper 1950X. These results are consistent with the PassMark Software’s single thread benchmark.

In the above chart I realized that the calculation speed of Threadipper and Xeon is reversed when using 8 core. Therefore, I examined the parallelization efficiency of Threadripper and Xeon E5-2667 v2. 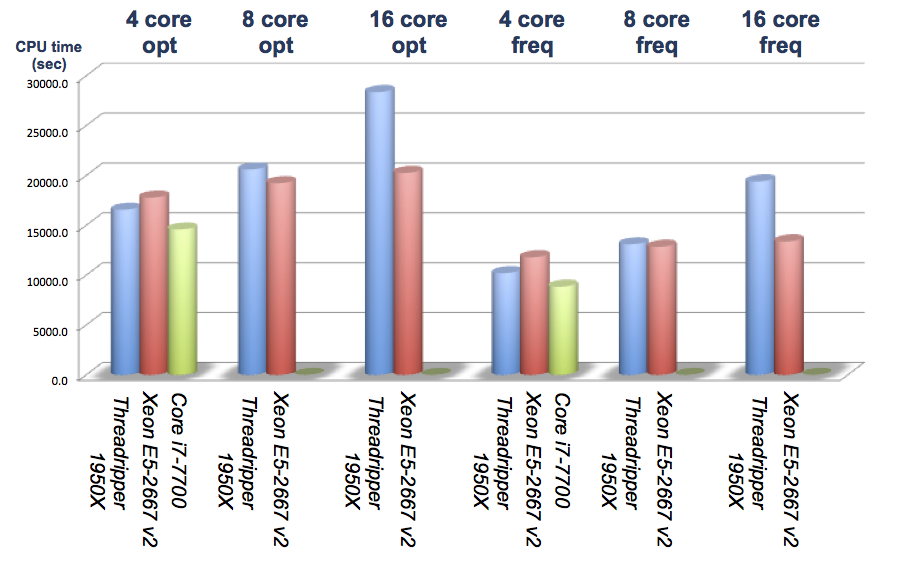 It was found that the parallelization efficiency was very bad when using all 16 cores. So we think that it is better to operate with 1 job with 4 cores or 8 cores. However, I think there is still room for improvement </ strong>. If there is a good way to increase parallelization efficiency, please let us know in the comments section or by email etc.

However, although the parallelization efficiency is low, when 16 cores are used, since it ends in a shorter time than when 8 cores are used. So if you are in the urgent situation like
“The revise of the thesis is close! I bet everything to this one job!”
Use 16 cores!

No Acceleration by AVX2?

It has been reported that Ryzen series CPUs are compatible for AVX2 but not accelerated. Here we tested SSE4, AVX and AVX2. In terms of calculation speed, there are no difference between them. Moreover, it seems. Rather, it seems that SSE 4 seems to be slightly faster! though it may be an error level

Before benchmarking threadripper, we were very nervous because we heard bad rumours that ryzen is not good for scientific calculation which is not true. But actually, for the use of gaussian, threadripper works well!

Though Parallelization Eficiency is very low, it works for 4-core jobs. If you run gaussian on Threadripper, don’t submit the 16-core job, but submit four 4-core jobs.
Personally, I strongly recommend Threadripper for gaussian!!

Visualize the molecule from the clipboard with GaussView [Python]

You can easily visualize the coordinates taken from the supporting information. Just copy the coordinates from SI, then run our script. You don't need to edit or make input files.

This article describes the efficient way to execute TS optimization, IRC calculation, and opt&freq. We provide a simple script to accelerate these calculation.

We installed linux on ryzen 3900x. We encountered lots of errors when installing linux. Here is the solution.
Building a PC with Ryzen Threadripper 1950x for Scientific Computation
When the IRC calculation doesn’t work…